Situated on the Dnipro River, Kiev (also Kyiv) is the capital city of Ukraine. After a rough and turbulent history, the town has become an interesting array of old and new buildings. More and more of the culture is being influenced by the characteristics of both Western and European customs, yet the Ukrainians who live here still cling proudly to tradition.

The modern city of Kiev is home to roughly three million people. Some of these people are foreign diplomats while others are students from other parts of the world. Thus, Kiev has a somewhat cosmopolitan feel. While many of its greater architectural and art treasures were destroyed in the Second World War, that which was left has been restored and now proudly adorns the face of this picturesque city. For a while there were understandable concerns about the safety of living in such close proximity to the destroyed nuclear reactor plant, but most scientists agree that the city is safe from the effects of radiation.

There is really so much to see and do in Kiev, you will be kept busy for days. Known as the ‘Green City’ for its many botanical gardens, parks and beautiful trees, the city is a wonder to behold in summer and spring. The nearby river provides hours of leisure activity in the form of swimming and boat rides, while many enjoy leisurely strolls and cycling trails along its banks. In the winter the lake freezes over to make way to ice fishermen and ice-skaters. The many theatres and opera houses provide indoor entertainment, and craft markets selling an abundance of traditional Ukrainian goods can be found in various city squares. There are art galleries, beautiful old buildings and even catacombs to see.Kiev is a charming and majestic city that should not be missed. 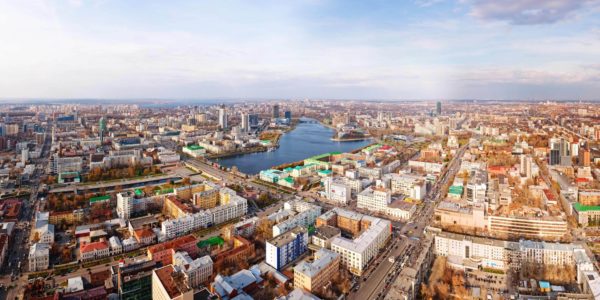 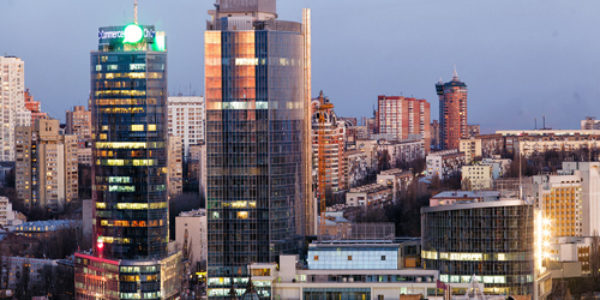 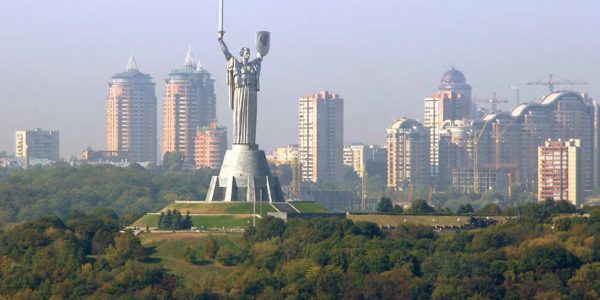 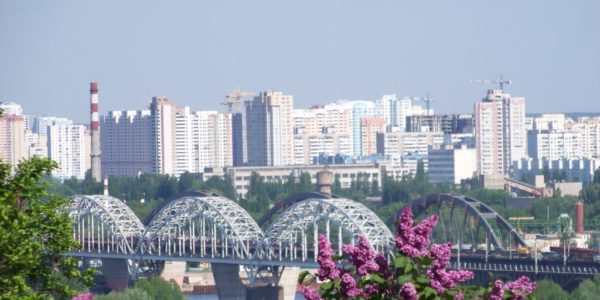 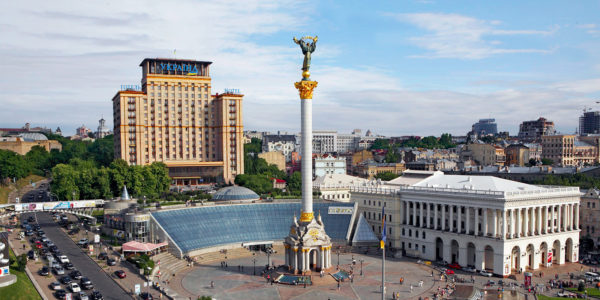 Odessa is the largest city along the entire Black Sea, the 5th largest city in Ukraine and arguably the most important city of trade. Many years ago, Odessa was once the 3rd leading city in old Russia, after Moscow and St. Petersburg. Odessa looks more like a city located on the Mediterranean, having been heavily influenced by French and Italian styles. Odessa has always had a spirit of freedom, probably gifted to her by her location and by her ability to accept many different people. The city has a wide variety of people including Ukrainian, Russian, Moldavian, Greek, Romanian, Bulgarian, Caucasian, Jewish, Turkish and Vietnamese.

Odessa is one of the major ports and an important centre of industry, science and culture. Her mild climate, warm waters and sunlit beaches attract thousands of tourists year around. Its shady streets, gorgeous buildings and pleasant squares give the city a certain manner of closeness and understanding. Odessa is simply charming with its stunning architecture. The city proved itself fertile ground for various architectural styles. Some buildings display a marvelous mixture of different styles, and some are built in the Art Nouveau Style which was in vogue at the turn of the century. Renaissance and Classicist styles are also widely present.

Today Odessa has a total population of about 1.1 million people. The city’s trades include that of shipbuilding, chemicals, oil refining, food processing and metalworking. Odessa also has a naval base and several fishing fleets, which adds to the cities economy.

Odessa is beautifully situated on green rolling hills, overlooking a small picturesque harbor. The best time to visit Odessa is during summer, when everything is in bloom and absolutely beautiful. The summer is especially favorable for those who are looking to tan on one of her tranquil white beaches.

Russian is the primary language spoken in Odessa, however, Ukrainian is the official language and many advertisements and signs are written in it. English is the most widely used tourist language. 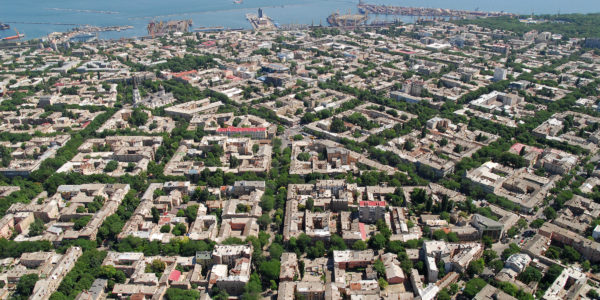 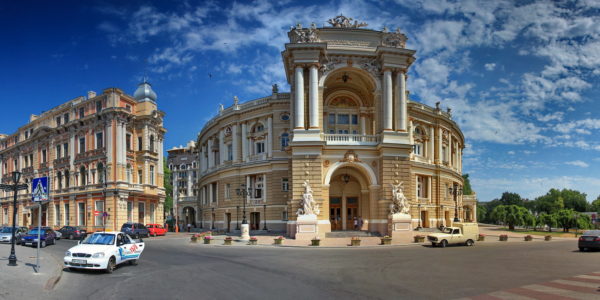 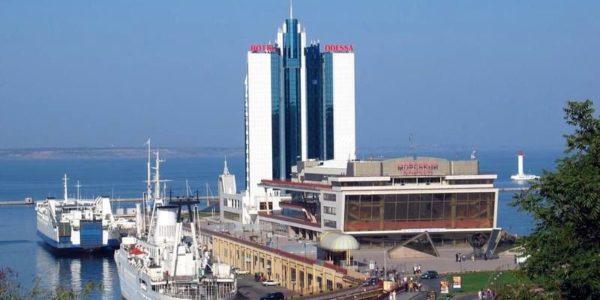 The city is located in Central Ukraine, with direct train and bus connections to Kyiv, L’viv, Odessa, Moscow, Bratislava and other major Eastern European cities.

Vinnytsa is a bi-lingual city, with most residents speaking both Ukrainian and Russian. Due to the Vinnytsa Pedagological University, as well as a good local school system, many young people also speak English, German and/or French.

Famous residents of the area include:

The Southern Bugh River flows through the center of Vinnytsa.

Vinnytsa is home to many respected universities and institutes, including the internationally-recognized Pirogov Medical University. The large foreign student population helps to make Vinnytsa one of the more diverse cities in Ukraine.

Vinnytsa is home base for the Ukrainian Air Force.

Agriculture is a major industry in the Vinnytsa oblast of Ukraine. This is due to the area’s famous ‘black soil’. In addition to industrial production of sugar beets, wheat, corn and tomatoes, local residents produce an enormous variety of fruits and vegetables that are available in the city markets. 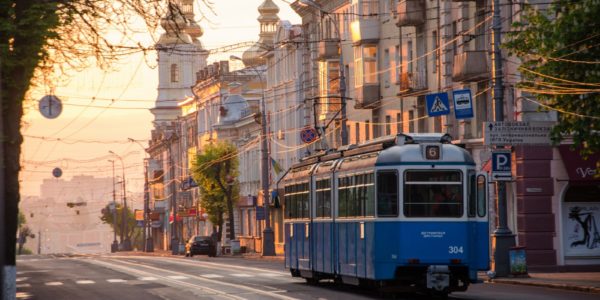 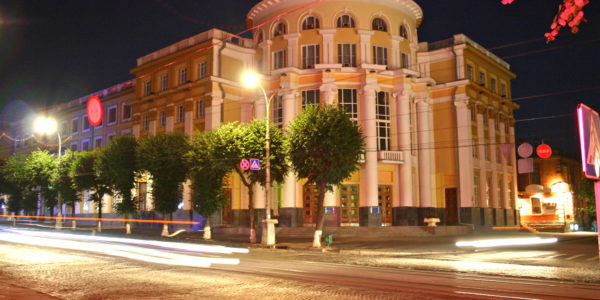 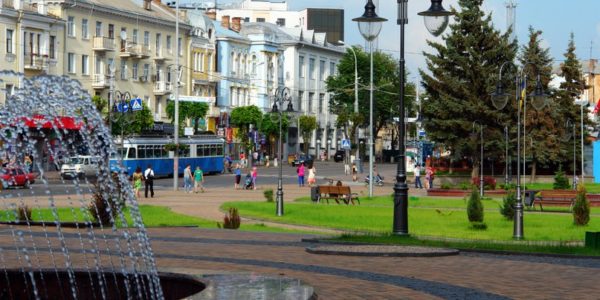 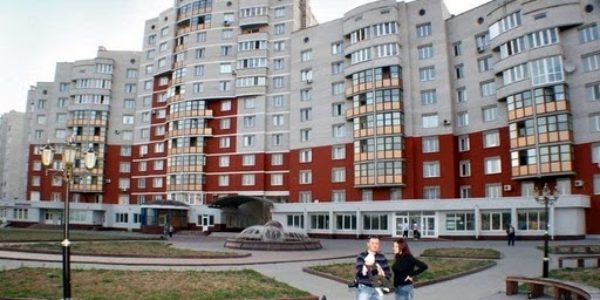 The second largest city in the Ukraine, Kharkiv (also known as Kharkov) is situated in the northeast of the country and serves as one of the main industrial, cultural and educational centers in the country. The country’s industry and research has been focused on arms production and machinery for many years. Today the city is home to such mega-companies as the Morozov Design Bureau, the Malyshev Tank Factory, Hartron and Turboatom. These companies specialize in fields such as tank and turbine production, and aerospace and nuclear electronic research.

Kharkiv was founded during the 17th century and has had a university since 1805. From 1917 to 1934 it served as capital of the Ukrainian Soviet Socialist Republic. Perhaps Karkiv’s most notable increase was during the Holodomor famine of the 1930s which saw many people arriving at the cities in search of food. It was a sad time and many lost their lives and were secretly buried by surviving relatives. It went on to suffer further tragedy when, during World War II, it was not only the site of several battles but was captured by Nazi Germany. The Nazis and the Red Army continually struggled for control over the city until August 1943 when it was liberated. During this period of struggle many tens of thousands lost their lives and the city suffered extensive damage.

Today Kharkiv has many attractions to be enjoyed by tourists. Kharkov’s Freedom Square is the largest city square in Europe and is second in the world only to the Tiananmen Square. It is a great place to start your sightseeing. After that you may wish to visit the Gosprom, the Mirror Stream, the Militia Museum, the Memorial Complex, the Shevchenko Monument and the Shevchenko Gardens. The Uspensky Cathedral and the Pokriv Cathedral are quite dramatic and look great in photographs. If you manage to fit that all into your trip, the Cable Road is another interesting place to stop. Make Kharkiv one of your stops while visiting the Ukraine and take the opportunity to learn more about the country’s turbulent history. 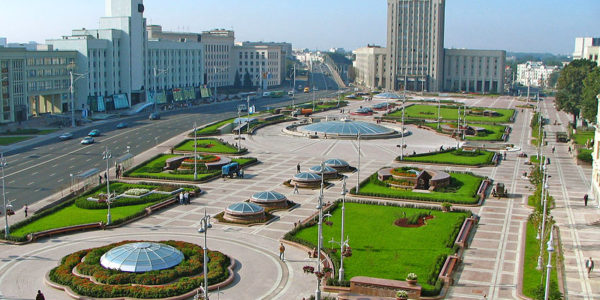 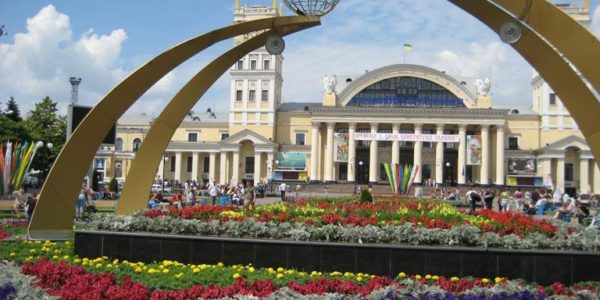 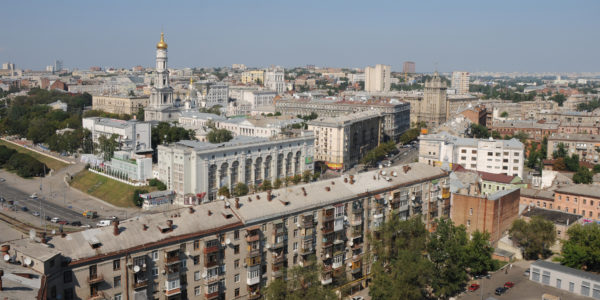 Founded in 1256, Lviv, or Lvov, has long been an important center of commerce in Ukraine. The city is responsible for the manufacture of electronic equipment, cars, agricultural machinery, chemicals, processed food and textiles. It has under a million inhabitants and a number of people commute from the surroundings suburbs daily. The winter is fairly cold and the summers are mild. The city sees a lot of cloud coverage.

Lviv is also one of the Ukraine’s leading cultural centers. The first high school in the city was founded by King Jan Kazimierz in 1661 and today the city is the proud home of the Lviv State University. It also boasts a number of theatres and museums. It also happens to be the seat of the Roman Catholic Ukrainian Orthodox and Armenian Orthodox archbishops. Two of its churches date back as early as the 14th century.

When touring Lviv, one might consider visiting the historical city center. The center is on the UNESCO World Heritage List and is fascinating to see. It includes the Ploscha Rynok Market Square with its Black House, the Armenian Cathedral, the Greek Cathedral, the Latin Cathedral, the Dominican Abey and the Boim Chapel. Or you can walk to the top of the Vysoky Zamok hill which overlooks the historical center. This is where the Union of Lublin mound is situated. For entertainment, the Philharmonic orchestra and the Lviv Opera and Ballet Theatre are a real cultural treat. On a more macabre note, the Lychakivskiy Cemetery is one of the biggest and more scenic in the region.

Lviv is an inviting and interesting place to visit. The cultural scene is constantly changing while history abounds and relics of the past remind us of what once transpired many hundreds of years ago. 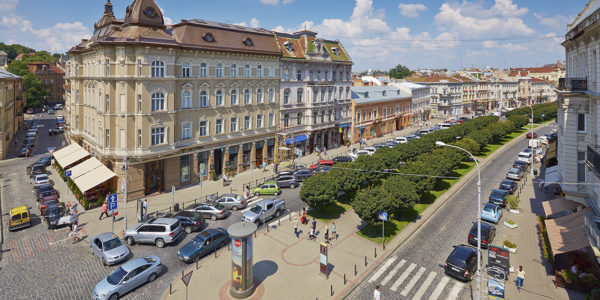 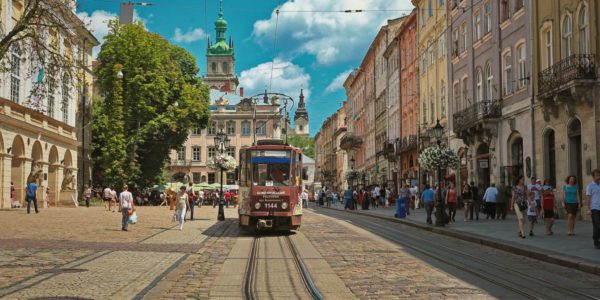 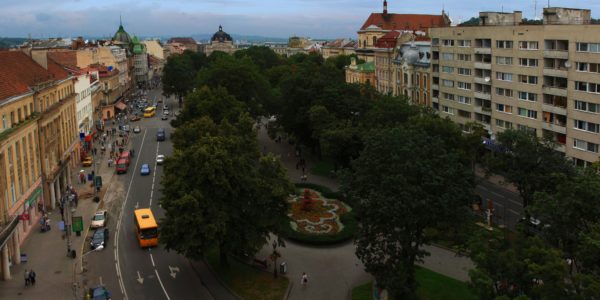 IVANO-FRANKIVSK, is the capital city of the Ivano-Frankivsk Oblast which lies to the west in Ukraine. It is a relatively small city with a population of roughly 205,000 people. The size of the city only adds to its charm.

Ivano-Frankivsk started life as a fortress which was built to protect the Polish-Lithuanian commonwealth from repeated Tatar invasions. The fortress was a great success and it wasn’t long before the city-fortress began to grow under the safety provided by this fortification. It was first mentioned in history in 1662 when it was granted the Magdeburg rights. The city went on to survive not only Tatar attacks but also those thrust upon it by invading Turkish and Russian forces. The Renaissance was a period of extensive growth and rebuilding, which lead to it becoming a somewhat more picturesque city. In fact it gained the nick-name ‘little Leopolis’ – Leopolis being the Latin name for Lviv. It was also at about this time that Ivano-Frankivsk, Ukraine, became an important center of Armenian culture.

After Poland was divided up in the ‘Partitions of Poland’, Ivano-Frankivsk came under Austrian rule before falling under the domain of the autonomous Kingdom of Galicia and Lodomeria. 1919 was a turbulent time for Ivano-Frankivsk as it was the subject of many Polish-Ukrainian skirmishes. It eventually ended up as the Second Polish Republic, serving as the Stanislawow Voivodship capital. Eventually, in 1939 it was invaded by German and Soviet forces and was attached to the Ukrainian SSR. Much of the Jewish population was murdered during the Nazi occupation, which was a very sad period in the city’s history.

Eventually, in 1962, the name was changed to Ivano-Frankivsk after the Ukrainian writer Ivan Franko. The 1990s saw it become one of the centers of the Ukrainian independence movement. Today the city stands up proudly in its own right. It is a pretty city with both a victorious and sad history which is interesting to explore should you have the time. Why not visit Ivano-Frankivsk next time you are in Ukraine and find out what it has to offer for yourself? 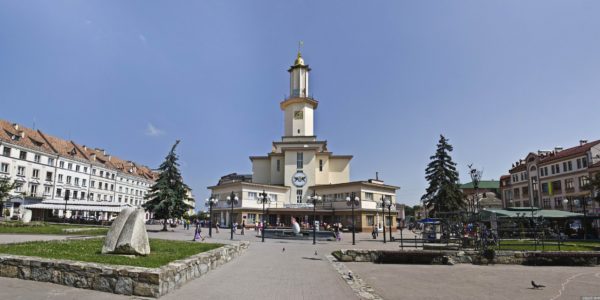 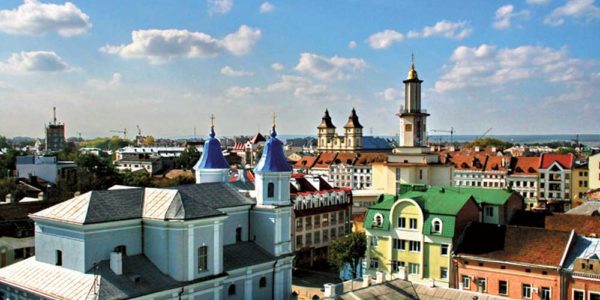 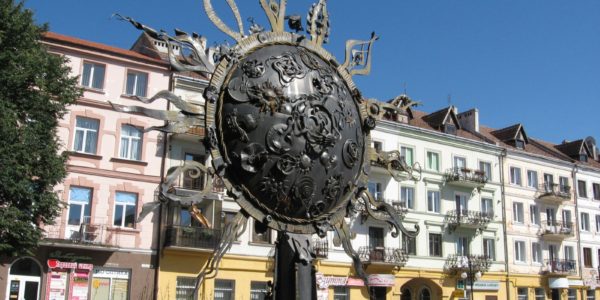